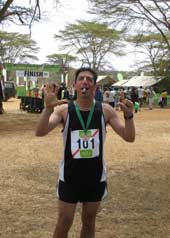 "Before I set out for my two month journey to Nepal and Mt. Everest, and the culmination of plans that had started almost five years previously, I had to visit my favorite cigar store, Mission Pipe, to stock up on enough cigars that would last me during the times I would have a chance to, and of course to celebrate. I know how strange that sounds, so let me give you some background: In late 1997, we were living in Dallas and were getting ready to move to Stockholm – where we would end up spending almost five years for the company I was working for at the time. At the going away party, my boss brought me a cigar to smoke. When I flew the next week to Sweden, I bought a box – and I have been a reveler of cigars ever since.

By 2002, I was looking for a way to get in shape and I decided to run the Stockholm Marathon. At the age of 45 then, I had never run longer than five miles. I smoked cigars until the last week. I trained, I ran, I finished – though not in a great time and that started an epic quest – to run marathons on the seven continents of the world – the so-called "seven summits club". Between 2002 and 2005, and while living in Indonesia and Malaysia, I was fortunate enough to complete marathons (26.2 miles) in Singapore, Kenya, Los Angeles, Australia, and finally Antarctica and the southern tip of Latin America - a place called Ushuaia. Along the way, I might have become the first person to smoke cigars on seven continents and run the seven marathons!

At the end of 2005, having moved back to Petaluma California then, a colleague gave me the book, "Into Thin Air" and I then decided to try to climb the world's seven highest mountains on the same seven continents and become one of the first persons to do that.

In September 2006, I took my first glacier mountaineering course on Mt. Baker in Washington in preparation for what would ultimately, and improbably, culminate in Mt. Everest. Even during that trip we had a great cigar at about 8,000' and shared with my climbing friends the pleasure of smoking at freezing temperatures and white-out conditions that I learned in Sweden J. After 2007, I would summit Mt. Rainier for training – and then Kilimanjaro (Africa), Elbrus (Europe), Kosciuszko (Australia), Aconcagua (Latin America – and at 23,000' the highest outside of the Himalayas) and finally Denali (Alaska) – again having enjoyed cigars at every location (but not at the summits, though I did have a nice Padron on the way to Kosciuszko (it's just a walk up).

I had just moved to Santa Clara in June of 2010 and of course I had to find a local store that I could frequently patronize and I found Mission Pipe quite by luck. Quickly it became my stopping and stocking up point for my favorite Padron 2000 series maduro and natural and getting to know the staff. Days before leaving, I bought a couple of boxes and a water-proof, weather-proof case and humidifiers for the long journey ahead. 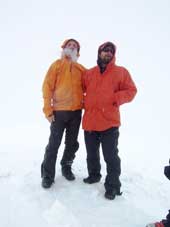 We left for Nepal on March 27th and I had my first cigar in Kathmandu while staying at the famous Yak and Yeti hotel that was also in the "Into Thin Air" book. Sitting by the pool before leaving, none of the other climbers were as so dedicated as me to the pleasure – but they would be later.

On the 8-day trek from Lukla to Everest Base Camp, where we went from 9,000' to 17,500', the Himalayas rose like jagged teeth all around us as the air became thinner and colder, the rocks harder and the snow more prevalent. On April 8th we arrived in EBC, which sits on about a 1,000' of permafrost glacier and rocks that have been thrown from the surrounding peaks.

Every day was harder than the last as we experienced temperatures of -17c (in the tents at night!) and we acclimatized and made our way up and down the mountain including twice through the Khumbu Icefall. Over a ten day period in late April we spent over ten nights above 20,000' (roughly the height of Kilimanjaro) and two nights without oxygen at 23,500' (camp three). This was a very difficult phase, but I knew if I could make it through this, we would earn the right to return to the lower villages and I could have the chance to enjoy another well-earned cigar.

In the lower village of Pheriche (14,500' – the height of Mt. Whitney, the highest in the continental U.S. I enjoyed a nice cigar with a climbing companion while the locals and climbers looked at us like we were a bit crazy.

Our summit push would start around Mother's Day, May 8th as the weather window was supposed to be there on May 12th (which it wasn't!) and I thought we would leave Monday and instead we left a day early. So on May 7th, I found a spot amongst the rocks and snow and the relative balmy temperatures in the afternoon sun and lit up what I was hoping would not be my last cigar. As I sat there and looked up at the massive peaks around and the Icefall, I had a chance to reflect on how I got here and desperately hoping that I could have a celebratory on in about a week.

When I came into the dining tent that night, one of my fellow climbers said, "Mitch, did I smell a cigar earlier?" I said "yes" a bit sheepishly.

We left at about 4:30 a.m. on that Sunday and used every last ounce of energy and strength to get to camp four at 26,000' having gone up the Icefall and the Lhotse. Face for the third time, and then crossing famous boundaries such as the Yellow Band and the Geneva Spur. We set out for the summit at 9 p.m. On May 11th and encountered weather later that night of -45c, 50-60 mph winds and conditions so bad that almost 60 of the 70 climbers that night were forced to turn around after the South Summit and before the Hillary Step at 28,400'. We continued on and I looked after all of my extremities with great care and thinking how nice a cigar would be to be held in fingers that would not be frostbitten.

When the summit finally came into view it looked like a mirage! We stayed 20 minutes after the 11 hour climb up and it would ultimately be 6 hours more before we got down to our windblown tents below the South Col. By May 15th we would be back in Base Camp after coming down more than 11,500'. With the temperatures still near freezing, I sat in the vestibule of my tent, opened the door, took out my favorite Padron and lit up while enjoying the view of where we had just been and savoring the satisfaction of summiting, and living and knowing there would be many more days like this ahead. I shared many of the cigars I bought with the sherpas, locals and ultimately with fellow climbers who gathered at the hotel to await our flights home. As we sat in the warming sun, and enjoying our adult beverages, I paid homage to cigar smokers all around the world and in the South Bay, who appreciate what it is like to live life to the fullest and never compromise the special things we have, like family, friends and a good, well-drawing, full-body smoke!

Check out the video on local NBC station and the cigar shot J http://www.nbcbayarea.com/news/local/Marathon_Mountaineer_Bay_Area-117625818.html